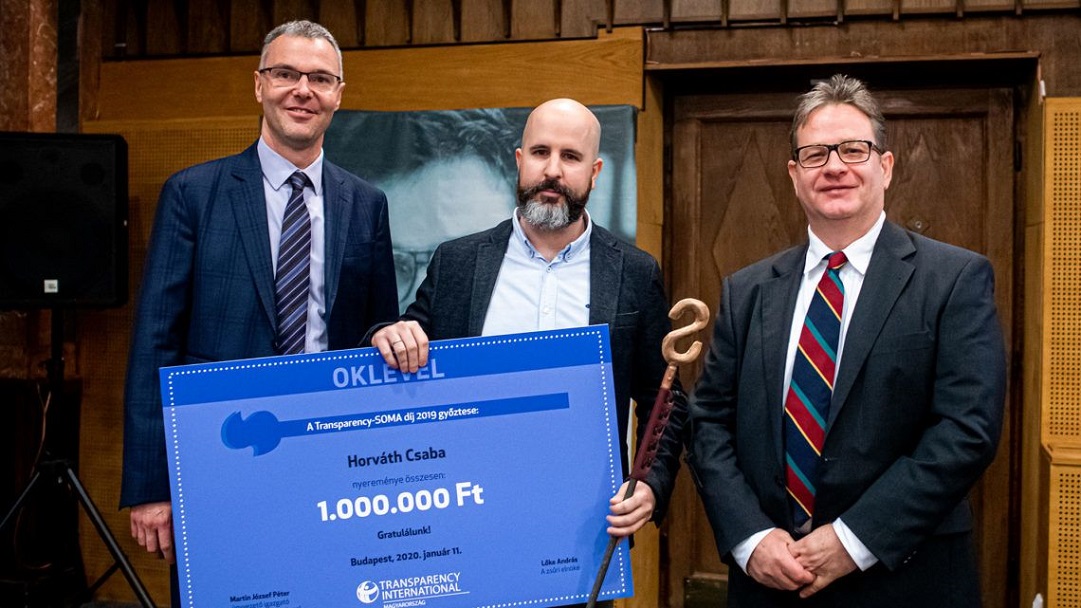 The journalist of 24.hu, Csaba László Horváth won the most prestigious Hungarian award of investigative journalism, the 19th edition of Transparency-Soma award.

Our colleague won the award respecting the memory of József Göbölyös, with a sequence of articles about the phantom-investments in Békés county of György Simonka, who was accused with fraud committed in a criminal organization, about the financial supports from the European Union which were continuously awarded to him, and about the fact, that the relatives of representatives of the governing parties were also accused with the crimes, and that Simonka also tried to bribe the authorities.

The jury which made the decision about the award, was formed by the following members: András Lőke, owner-president of ittlakunk.hu, founder of Soma-Award; József Péter Martin, director of Transparency International’s Hungarian organization; András Stumpf, journalist, co-founder of valaszonline.hu; and Ágnes Ungár, leader of Department of Info-communication of the Budapest Corvinus University.
In his introductory speech held on the awarding ceremony, József Martin Péter, the director of the Hungarian organization of the awarding Transparency International explained: freedom of media nowadays points further than the freedom of thought. Real and diversified media market, objective journalism, the independency of media authorities from the power, and the equal access to the media contents are parts of it. All of those are such things, which aren’t presented in Hungary on an acceptable level, or they are completely missing. Martin spoke about the reasons of the downfall of the Hungarian media’s freedom, mentioning the propagandistic operation of the country, the serious deformation of the media market, and the political division, unique in Europe.

According to the director of TI, despite the disappointing trends, there are still operating newspapers and sites – and even publishers – which are able to keep themselves independent from the political pressure, they investigate their corrupt cases, and are acting in accordance with the norms of this branch. In those workshops, the Transparency-Soma Award winning creations are born – he added.
The jury emphasized five competition works, among them another sequence of articles from our colleague, which was about the method, how people in close connection to the representatives in the council of District I of Budapest got right to rent tenement-dwellings.